The THC in marijuana increases your testosterone levels… which could lead to increased DHT production.

The main and most potent ingredient in marijuana, is tetrahydrocannabinol (THC). When you smoke, vaporize or otherwise ingest it, there’s an immediate increase in testosterone levels.   As a result, these increased testosterone levels can cause your skin’s oil glands to produce more sebum oil, which can lead to scalp inflammation. People who are chronic users of marijuana can also experience hair loss on the scalp or even excess hair growth in other parts of their bodies due to this testosterone jump.

However, the testosterone increase — which is in the order of 3 to 5 percent — is too marginal to cause unusual hair growth patterns.  We’re talking about a ridiculous amount of pot.  Pounds at a time.

THC is also anti-inflammatory and an antioxidant, and it has potential anti-aging properties.

Don’t make a judgement call just yet — more and more, people are discovering the upside of getting high. Even though THC may cause an increase in testosterone levels, it’s also gaining a reputation as an anti-inflammatory agent and an antioxidant in the medical world. So while the actual smoke from marijuana can suppress collagen production, some studies have shown that the THC itself has anti-aging properties (thanks to those antioxidants, which neutralize the damaging effects of free radical oxygen particles). Moderate weed consumption is even sometimes compared with drinking a glass of red wine.

The delivery system is really critical. It is recommended to use a vaporizer if you’re dead-set on using marijuana and want to enjoy its supposed anti-inflammatory benefits, even a bong would be preferable [to smoking].” (Remember: There is no fundamental difference between marijuana smoke and cigarette smoke when it comes to skin)

Additionally, we naturally have THC receptors in our brains, which means that cannabinoids, the compounds present in cannabis, aren’t foreign to our systems. “Those THC receptors actually can lead to increased production of neurotransmitters that make us feel better, like serotonin,”  Indeed, neuroscientists who have looked into the connection between cannabis and depression have found that low doses of THC are associated with a drop in depressive symptoms. But it’s important to note that too much can actually have the opposite effect.

The bottom line: Can marijuana cause hair loss?  There are mixed philosophies when it comes to both the positive and negative effects of marijuana on the scalp, so choose wisely — and be mindful of your local laws. 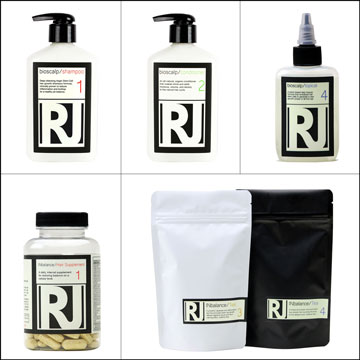 Robert James Clinic is a Trichology and Hair Loss Center that exclusively specializes in hair growth from a holistic approach combining multiple therapies such as PRP® and LLLT.